Last year I decided to do what I love and love what I do. So, I started a business called “table24.” I offered personal chef and small-scale catering.

Clams Casino and the logo

Out I ventured with grand plans, a beautiful website and chef’s jackets. Oh, the chef’s jackets! I was off to the races. I immediately had clients! I was busy in the kitchen! I was trying all sorts of new recipes! I am yelling right now!

Just what I wanted. Or so I thought. It was a huge disappointment. It was also a huge lesson.

You see, for me, cooking is a creative and cathartic outlet. Best of all, cooking is the means by which I express my love and affection for others.  In my family, food is glue for our togetherness. We all participate in it, find joy in it and, well, love to eat.  And I get to put it all on the table. YAY! 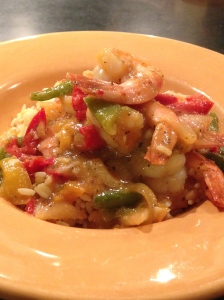 My Michael and My Three Musketeers (a.k.a. my boys) get jazzed about giving me cooking challenges. We have had some doozies. One of their all time favorites is Fried Chicken and Waffles. It was love at first bite.  I am so happy when they are happy. And when mention of our evening meal gets airtime at bedtime prayers. Alleluia! Score!

As the head chef (and only chef) at table24, I spent the majority of my time in the kitchen.

Alone and I are not a super combination. I am far too social. I started to talk to myself. I began a love affair with Dierks Bently and Keith Urban over Pandora. I developed a tick. It was worrisome.

Then, it dawned on me.  All of a sudden cooking carried a new meaning, a new stigmata- money.  It was my business so I charged people. I was expressing my affection for those about whom I cared and my new clients. And  I expected to be PAID for it?  Oh, how very wrong.

I packed up that carnival and left town.

Much like cooking, writing is cathartic. When I started MARYMORPHOSIS last month, my goal was to help others, to serve others, in sharing my story. 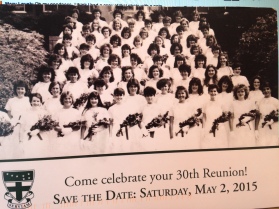 The motto of Ursuline Academy is Serviam, Latin for “I will serve.”

I was pleasantly surprised and a bit overwhelmed by the number of women, classmates and otherwise, who actually pulled me aside privately to express how impactful the content on MARYMORPHOSIS has been.

That to me is success.

When I first attended Ursuline I was thirteen years old and entering the 8th grade.  It had been a year since that day in the kitchen when I “outed” my abuser.  I was still reeling from the response, or lack thereof.  I was also still being abused.

My parents sent me to Ursuline primarily because it was an outstanding school.  But also, they pulled me out of public school because I was so horribly bullied that it was unbearable.

This was on the tail end of the time span that my grandfather abused me but it was still happening. Simultaneously, I was traumatized by a handful of horribly cruel girls who victimized me because I had a new pair of Nike sneakers or a cute boy had a crush on me and not them.  How Cinderella-esque, hmm?

The Ursuline girls were beautiful in every way.  I was made to feel welcome. They included me. They were so kind to me.  Thank you eighth-grade friends, Gaby, Lisa, Anna, Sarah, Christine, Kim, Sheila and on and on. 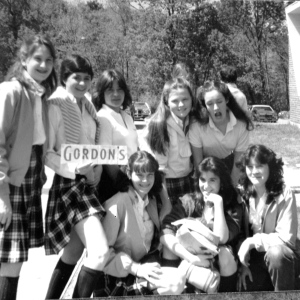 I was shocked.  How was it possible that all of a sudden I was liked?  I had a warped perception of myself. I loathed me. How on God’s green earth could anyone like me?

As the years passed my network of friends grew and changed.  I always felt liked and accepted on some level. But that deep-rooted hurt dominated.  Having been the victim of sexual abuse killed my spirit, robbed me of my purity and stripped me of my childhood.

Then vicious, vulture-ish girls took what was left.

I should have won an Academy Award. I played the part well. I was wearing a costume and by that in no way am I referring to my green plaid skirt and sensible brown shoes.  It was four years of “Showtime!”

I still have my beloved green plaid skirt.  My Dexter is its best accessory!

I put my head into my books, and I pulled my grades from a consistent B/B+ average to a straight A average. Ursuline was HARD. And my classmates were brilliant. I did homework until 1:00 AM most nights. But I did it.

I was in clubs and committees, the class VP and the captain of the cheerleading squad at our brother school. I had great roles in school productions. I was cheerful with a cute and popular boyfriend who was the lead in the school musical. (Incidentally, while I was on stage he was backstage with one of the dancers. Yawn- you know that deal.)

And, of course, I accomplished all of this on about 300 calories a day. I starved  myself so that I would be the skinny “-est.”  Eshh

Prior to the 30 year mark, former Mary would have fasted, had a fabulous hairdo and the perfect slimming outfit prior to attending said re-union. This year I didn’t iron my pants and I had roots. Oh, and I had dirt under my nails from gardening earlier that day. I did shower, however.

But in 2015, for the first time, I felt as if I could show my high school classmates the real Mary. The real, raw, honest Mary.

It felt so good just to be myself.

And my classmates were STILL nice to me.

When I post I often feel as if I have taken off all of my clothes and am doing high, deliberate kicks with “jazz hands” across stage of  the nationally televised Presidential debate.  I feel like I am the half-time show at the Superbowl.

It sounds mortifying, doesn’t it? Strangely, there is great comfort in vulnerability.

Every day I remind myself to “love myself with the heart with which I love my child.” And Honey, let me tell you, it is a hell of a lighter load.

I left my high school that evening feeling lighter and happier. I felt as if I were re-writing part of that sad high-school past. I felt as if I got a do-over.  I was able to accept the kindness of others. It was joyful.

Writing has become a part of my daily life. I know that some of my friends won’t read what I write. Some are probably shaking their heads and snickering with others on the ball field but want in on something?

HA ! Imagine that!? It feels LIBERATING!  People can relate! Through one’s honesty, others find their humanity and feel a sense of community.

But, the best feeling is that I genuinely believe that I am helping people.  And folks have told me just that. And I believe them. So there.

It is such a juxtaposition that there is power in vulnerability, don’t you think? One would think that being vulnerable simply makes you weak. That is wrong. Bet on it.

Over and over we read the response, “ME TOO.”Maybe you said it, too.

Do you see what I mean? In telling our stories, in our bare, honest truth and without shame, there is power. Good power. Power in your freedom, your happiness and your self-talk.

There is an abundance of love that we all have deep inside ourselves that is meant for US. WE MUST LOVE OURSELVES.

And that, my pretties, is it for today.