I had been accepted to Boston College’s Abbey Theater summer program! Just imagine, a summer in the Emerald Isle. What a wonderful adventure to precede my senior year of college. I was dancing a jig. I was ready for a Guinness.  I  was ready to meet my first leprechaun.

I had never been so far away from home.  And I had certainly not been away from home for such a long time. I geared up to be homesick.  I was doing the, you know, “managing my expectations” thing. There were dramatic goodbyes and gnashing of teeth and tears and farewells.

My family, my bestie, Clare, and my boyfriend of a few years (let’s call him “Guy”) waved their handkerchiefs in Logan’s Terminal E.  I was off.

As much as I looked forward to my adventure, I was semi-stuck in a state of despair.  What would I do without Guy for the summer? Oh sure, it would be “good for us to be apart for a bit,” as well-meaning folks said.

That was the world’s greatest understatement.

Twenty-five fabulous Boston College students joined in Sandymount, Dublin to unpack for a summer of storytelling, theater and history.  Off we went on the #3 bus to Dublin each morning to the Abbey. Off we went to the pub each afternoon. Life was good.  Friendships were made.

If you have ever participated in the theater, you will understand what I am about to say.

My oldest is a chip off the old block.  He is an actor.

He has attended enriching summer theater programs; he has had all sorts roles in many productions. He has recited everything from one single line to entire monologs. His school has earned medals and awards. I am SO proud of him.

I have been the taxi driver to said performances and rehearsals.

Pulling up to Summer School for the Performing Arts each morning over the past several summers was a treat.  Each day there was IMPROV at car drop-off in the parking lot.  There was singing and laughter and hugs and high-fives.  Everyone was smiling.  It was seriously fun. It was welcoming and warm. I wanted to jump out of the car and join in.

The awesome thing about acting is that we can step out of ourselves and morph into whatever part we are playing. The stage is a welcome mat for whomever we chose to be. Actors know that. Actors accept that. On the stage, everyone can be a star.

In Ireland, I learned a vast education outside the classroom, too. Specifically on a bench by the sea with my new friend, Bob.

Bob was the first person I met when I arrived at our summer accommodation in Sandymount.

Bob has marked charisma. He commands a crowd with his quick wit and humor. He certainly gave the natives a run for their money. He is smart and hilarious and jovial.

Bob is also soulful and resilient. He is fervent. He is compassionate. He had been dealt a tough hand, but he rose above it. At  22 years old he had lived, and gracefully survived, a life that some have not lived by the age of 90.

It took almost 25 years to sink in.

What was mesmerizing about Bob is that he spoke in a way that lacked SHAME. He had been through the ringer. He had struggled. And he was shameless.

For two months, we developed a friendship. We shared our stories.  My poor choices in life became apparent.   It was inspirational to see how he came out beautifully healed, gentle and in tact.

Just another day exploring the countryside (in my green mohair sweater)

He offered such support and kindness. Tragically, it just whizzed past me.

Bob looked as if I had hit him in the gut.

He could not believe that beautiful (?) me could live with that.  He was filled with compassion.

He stood up and positioned himself as a boxer. He talked about being knocked down but that we have to get up, take our stance and fight back. We feel hurt and beaten. At the time, we can’t see it but eventually, we get it. And we mend.

And our beautiful scars show growth.

It was inspirational. It was moving. He was rattled by my pain. But I was not rattled by own pain.

Or so I thought.

I thought I was in love with Guy. I stayed with Guy in that horrible place because it felt familiar.  It was my comfort zone. It is what I had come to expect.

Here was the thing.

I loved Bob way you love your best friend. The friend who accepts you warts and all.

He loved me differently.

He could not understand why I would continue to stay with the abusive, cheating boyfriend. I could not accept his concerns or heed his advice.  I was young, naive and busted.

My benchmark for love was tragically shallow.  Guy was the “greatest.” The greatest to me was the one who made me feel like I was the worst, like I was in that familiar place. I attracted abusive men.

In hindsight, I understand. If I had gone to that loving place with him, I would have hurt him deeply.  On some subconscious level I believe I knew that I could not reciprocate.

Yeats refers to Ireland in his poem Easter 1916 as a “terrible beauty.” His metaphor is about Ireland’s emerging independence, what it took to get there and what would be the result from the Easter Rising.

Yeats said Irish Patriots suffered and died during the Easter Rising, which was both terrible and beautiful. There was beauty in their courage and fervor for independence. It was terrible that they suffered punishment and brutal defeat by the English.

But this it speaks on other levels, too. Ireland has lush green landscapes, pots of gold, but it also has the Dole. There has been illness and strife and poverty and plague. The sun shines simultaneously during a soft rain.

Ireland survived. And it is beautiful.

I was in a beautiful place full of hope and promise with grace all around me.  Grace was inviting me to step out of that dark place. Grace urged me to look at my choices and make different ones. I could not do it. Dark was better. Standing in the rain was better even though the sky held rainbows. I did not have what the Patriots had.

It was a terrible beauty.

On one of our final weekends in Ireland my dear friends, Jane, Bob and I took a road trip.  We stopped at a shop in Galway where I fell in love with two beautiful mohair sweaters. One was green and one black. I could afford only one. Bob wanted to buy the other for me, but I wouldn’t let him.

I didn’t deserve that! 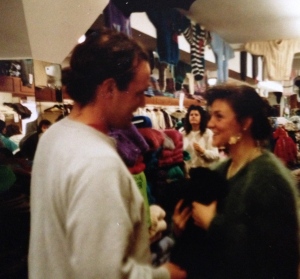 Here we are discussing green? Or black?

(There has never been a greater negotiation as this one since my son hit his teens.)

Later that night we drove along Dingle Peninsula.  At the pinnacle, we pulled over next to a celtic cross. There were crashing waves, a full moon and a random lone sheep that jumped over the stone ledge that defined the narrow road from the sea below.

It was a beautiful night and a holy moment. I felt happy and full.  My summer had been magical. The three of us were quiet and took it all in.

I took a photo of Bob standing on the stone ledge.

In December of our senior year, he showed up at my apartment with a gift. It was the black mohair sweater we saw in Galway.

I  never saw him after that. I never communicated with him after that.  I tried and tried, but he did not respond.  Ask my bestie, Clare.  Looking for him over the years became a “thing.” I was sad.

It was all my fault. I blew it.

Sometimes people love you no matter whether you allow them to or not.

At age 22, I was broken and hurting. I was in denial. I believed that Guy loved me.  He treated me beautifully on the surface, on stage, but he desecrated me.  He was an unfaithful playboy. He was disrespectful and cocky.

He treated me in a way that felt comfortable.

I am not sure that women realize something immensely important.  Just because he is your “boyfriend” you are still an individual who gets to pick how you are treated.  He is not the boss of you in any way, spiritually, physically, soulfully. You are IN CHARGE.

My Michael has a key chain that says “I’m Third.”

God is first; others are second, and he is third.

It is beautiful.  He lives it.  He is loving and kind and gracious. He is thankful and appreciative. He looks out for others. He does not kill ants. That is our only problem.

Bob was right. Grace gave me a hint, a promise. And 25 years later here I am.

My Michael is my forever Grace, loving me with kindness and an open heart and respect. I am treasured.  I never knew that would happen. Even though Bob told me that it could.

God loans people to us.

We never know for how long or for what reason.

We eventually realize it, and it is simply divine.

Thank you, God, for My Michael.

You kept good on your promise!